The end of the world cup is finally getting near & everyone rushing to predict the final score of the game. I thought I would share an interesting thing I made just two weeks into the world cup. Since the start of it everyone & almost all the companies were posting predict and win score guessing competitions and among them was also the purple-lane app.

Purple-lane is this amazing reward program app based in Maldives that helps companies to enroll & manage their customers in their reward programs such as coupons, discounts & more.

I got signed up for the world-cup Foari that they were doing and started making predictions of the match of my own. Almost everything I predicted was wrong. And I was also missing matches because I wasn’t able to watch or keep up with the world-cup schedule. So thought of making the process automated.

So I looked under the hood of how purple-lane API worked & found the end-point to predict the score for the match & the live fixtures.

Sample fixture response from their API

There was a prediction_closes_at time for each fixture of the match so I knew from the pattern of the matches so far that If neither of the team’s scored before the prediction closes (which was approx 70mins into the game) I would get points. And for extra monitoring, I also made a telegram bot to send me a notification every time the prediction bot made a prediction. 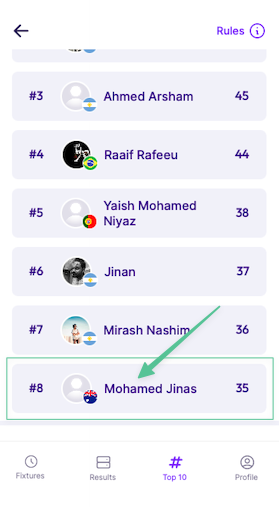 So I tested and made the bot in like few hours & I initially made it to predict only the last 2 mins before the prediction closes but that had a major flaw when sometimes when the cron job failed. I instead then changed the bot to predict the current score every 2 mins until the prediction close time. I got a lot of points and even somehow I was able to reach the leaderboard! 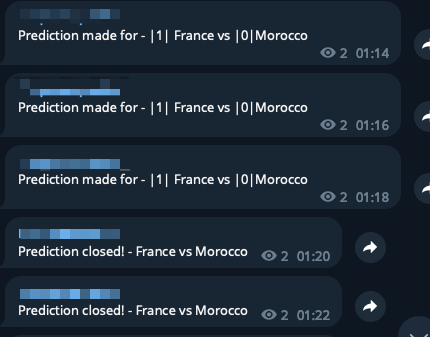 I think if the bot was active from the beginning of world-cup I would have had a chance to win some goodies. But it was just unpredictable in the knock-out matches & most matches after that. But it was a really fun experiment regardless.

Below is the link to the GitHub repo of the project. Don’t mind the messy code I was in a rush.